I think the title says it, no? It just seems too obvious when you write it down: ditch the soul-crushing job. Why wouldn’t you?

Yes, I’m saying this a bit tongue in cheek. I know all too well that it’s much MUCH easier said than done. It took me years to even admit to the fact that my career was indeed soul crushing. My family was depending on me to bring in money. My father was depending on me to take over the business. My own sense of success and well-being – fed to me by societal expectations, for sure – screamed at me to suck it up and get my head on straight. To even think of my work and responsibilities as “soul crushing” was a sign of weakness I had to beat down and lock away as I climbed onto the treadmill for another dreaded day…

So yeah, ditching the soul-crushing job may sound obvious. But it isn’t always when you’re treading water on a Monday morning just trying to keep your head above the waves…

My good friend Jennifer McQueen has experienced the soul-crushing job too – and her experience was to the extreme. Jen and I grew up here in Thunder Bay, but she moved to Sauk City, Wisconsin and had a family. Luckily, she’s one of those lifelong friends who I’ll be close to no matter where in the world Life takes either one of us. I connected with her recently to talk about her own experiences juggling work, four kids (sometimes as a single mom), and health issues – and how she managed to ditch her own soul-crushing job.

Jen used to work in the pharmaceutical industry. For the first 10 years of her career, she worked in documentation and archiving before moving to sample management – logging and storing samples during testing. But conflicts with her company due to her health issues were a constant problem, and they got worse when she moved departments.

“It goes back a number of years, I’ve struggled with migraines since I was in my late teens. I had a supervisor finally say to me, ‘I really think you need to protect yourself in the workforce.’ Unexcused absences due to migraines can make you lose your job.”

Jen filed under the Family and Medical Leave Act (FMLA), which in the States protects workers from “unexcused absences” such as health emergencies. She said that was fine for a few years, but a change in managers above her started to make her life a living hell. The new manager gave her poor reviews due to these absences, which can be career-busting at the very least and lead to termination at worst.

“It was completely against the law, but our HR department didn’t back me up. They backed management, because it’s Corporate America.”

Things got much worse when her father passed. Not only did that add to her feelings of frustration and alienation, but now she was dealing with grief, depression, and added stress along with the migraines. It got to be too much.

“I felt so alone. I had no support. I used up all my protection under FMLA, and that gave me grounds to really go after me.”

Getting Off the Treadmill Sometimes Has Special Challenges

Quitting in the US is much harder though because often when you leave your job, you lose your health insurance. That means a simple trip to the ER with the kids can cost you thousands. Jen wasn’t prepared to expose her family to that much financial and/or health risk.

“My husband finally got insurance that was reasonably priced, so I started preparing to leave.” That was yet another hurdle due to Wisconsin’s labour laws. She was forced to quietly and suddenly exit the company to avoid more persecution, accusations, and stress. “It wasn’t how I wanted to leave – I didn’t want to leave my team high and dry. But that was the corner I was back into.”

Breaking Out to the Other Side

Once she got out of that corner though, her options were wide open. Jen launched her own Etsy business, Hair with Flair, which featured colourful, fun stuff for kids. That grew into a new business, Charmed by Teagan, named after her youngest daughter.

“I felt like the name covered more things. I can sell anything under Charmed by Teagan rather than Hair with Flair. I’ve been running under that name for about six years now.”

Jen quickly became incredibly successful selling sewed and embroidered items including blankets, pillows, seasonal items, and even her own fabric.

“The growth is amazing,” she said. Jen admitted that success brings its own issues. She has started to get her husband more involved with family responsibilities including booking dentist appointments for their two youngest (the other two are now grown and moved out) so she can focus more on the business – and herself.

Ultimately though, ditching the soul-crushing job was worth it.

“I couldn’t be who Corporate America wanted me to be. But I got out, and I haven’t looked back since. I’m so happy and so thankful. I’m starting now to try to carve out time for me.”

“Me Time” in Guatemala

And I’m so happy to say that part of that is going on the Walk Guatemala G’WA with me next February with her friend Angela! We will trek through the beautiful Guatemalan mountains and visit remote Mayan villages to see how these warm, inviting, and wonderful people live today. The highlight of our journey is Lake Atitlán, one of the most serene spots in the world, which Lonely Planet called “the closest thing to Eden on earth”. There are also options to visit Mayan ruins and watch the spectacular Volcan Acatenango erupt in the dawn light.

This guided tour is as much an inner journey as it is a physical walk. As I always say, Guatemala is good for the soul – especially for those souls needing to get off the treadmill! We’ll focus on helping you re-discover yourself with daily meditation, special She Walks the Walk journalling sessions filled with prompts to help you turn inwards, and group discussions where you can share as much as you want or just listen to the conversations around you. Self-discovery is the main goal of every G’WA.

I’m thrilled they have both decided to take some “me time” in Guatemala, along with the others who have signed up so far. (BTW, there are a few spots left – so if you’re thinking of joining, think fast…) These expeditions are as much about exploring the wild you as they are about trekking the wild terrain. I’m excited to see how the whole experience transforms Jen and all the women who step out of their comfort zones and into an adventure of a lifetime.

I’m so proud of my friend Jen. There are soul-crushing jobs, and then there is the ordeal that she went through. Jen is such a strong, independent woman who was put in a number of really bad situations. It’s heartwarming to see her come out of the other side stronger and, of course, happier. Leaving a bad situation is never as easy as it sounds. But as Jen shows us, it is sooooo worth it.

Our Walk Guatemala G’WA will be both a reward and another step in her journey. Jen will get the “me time” she deserves, and we’ll help her put the pain and hardships of that soul-crushing job behind her. I am honoured to help every way I can, and so glad to be a part of her journey.

I hope you can join us in February 2023, too! Learn more about this one-of-a-kind trek here:https://shewalksthewalk.com/gwas/walk-guatemala/ 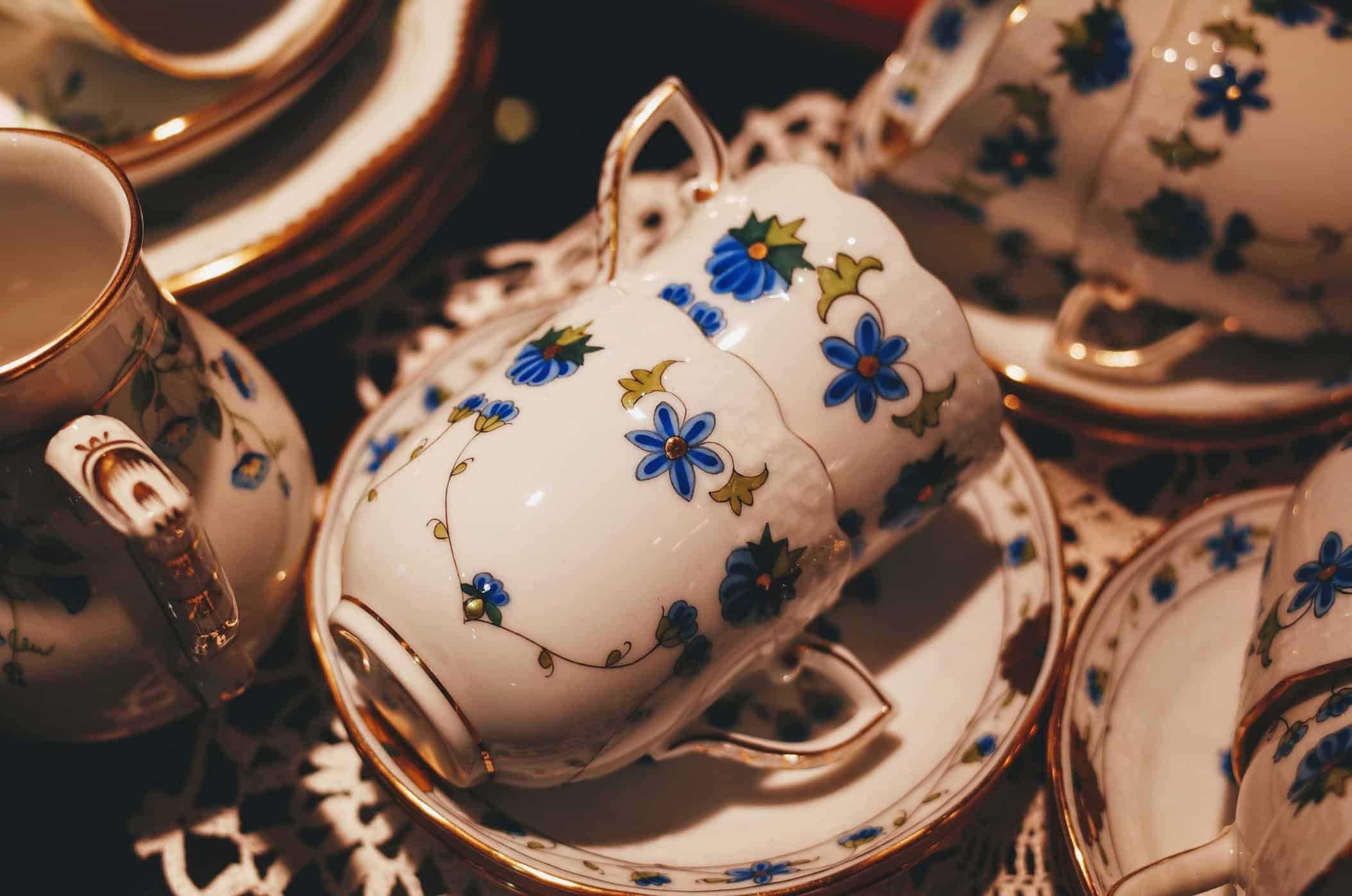 I held the earrings in my hand and turned them over and over. They were only $25, but I’d no intention of buying anything and was just there to keep my mom company. We’ve been trying to fill her interminably long days. It’s still hard without my dad. But maybe a local craft show would pick her up.

The TEA TIME MOSAICS table oozed delight. And that’s not a word I throw around casually! It took a beat, but soon I understood this artist’s modus operandi: handcrafted jewellery from broken dishes. Now this is something I could really get behind! (And God knows my clumsy self could donate to her cause: ask me about my infamous ‘Breakage List’ from my early serving days…)

I studied the pair in my hands; it’s rare to find china with ivy. You see lots of pine combs and twirly flourishes, but these little chunks were special. A finely-woven gold hoop offset the dangly earrings. “But will I actually wear them?” I thought to myself.

For some reason, I then asked the woman if this was her full-time gig. She replied, “it is, and it isn’t.” She’s hoping to get back into the world of mental health and addictions counselling, something for which she went to school and spent years doing.

My curiosity unravelled further and I asked her how she got started:

“I loved collecting old teacups, and one day, I broke my favourite. I couldn’t bear to throw out any of the pieces, so I kept them.”

“Well, I saw something new in the shattered bits. I thought I could smooth out the rough edges and maybe create a pendent or some earrings.”

Her table of offerings glittered under the massive chandeliers of the ballroom. Quirky and fun, all original work. No two pieces ever the same.

I realized my jaw was wide open while she continued to pour out her inspiring story. It reminded me of someone but I wasn’t sure who, until fuzzy dots began to slowly connect in my brain. Here I am, trying to make something from nothing (the short version of my She Walks the Walk story!). And here I am, picking up the pieces of my shattered heart.

I hate admitting this, but when my dad died, I lost a pile of confidence. He was my number one cheerleader, my go-to for advice and he understood my blindspots intuitively. On the inside, we were almost the same person.

I bought the damn earrings. They will never go with my mostly-hiking-attire wardrobe. But they’ll remind me that we all have choices when our worlds come crashing down. We can pick up the pieces and try again. We can find something new. We can use our creative energy to begin again. We can make something beautiful out of our frustration.

Connect with other like-minded women, take courses, and subscribe to my newsletter.